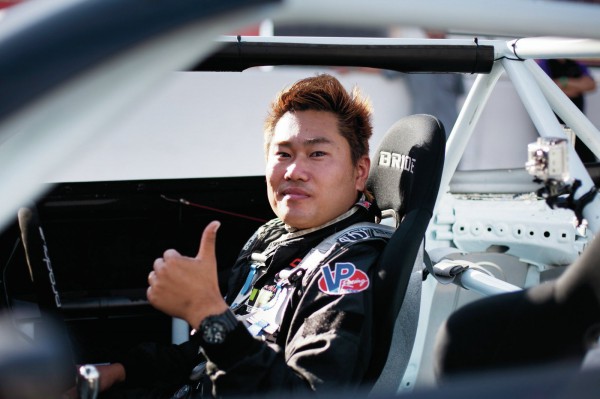 He fell in love with motorcycles when he was a small child, just like his father, so it is not strange at all that he got a license for driving a motorcycle immediately after the age of 16 years. One night Saito and his friends attended on a drift meeting on the hills of Karuizawa, where he saw the drifting of a white Mercedes-Benz and decided that one day he alone will become a drift driver too.

After turning 18, he immediately got a driver’s license, but his father did not want his son to drift, so he bought a Mini Cooper as his first car. Saito did not know that this was not an appropriate vehicle to drift and therefore tried to drift with him – as soon as he realized that the car is completely inappropriate, he immediately separates from the car. Then he bought a Nissan Silvia S13 not even having the permission of his parents and his first session in the attempt to drift lasted a day and a half, stopping only for fuel and food. Although destroying his car a few weeks later, Saito learned very much from his first attempt. In 2005, Saito won the title for beginners.

Unlike most drivers in the D1 Grand Prix series, his work is not associated mainly with drifting, because he lives and works in a nursery. There he cares for the children and also drives the bus when children go on trips. His competing in the D1 Grand Prix series began in the third round of the 2004 season driving his Toyota Mark II JZX90. After that he quickly develops his drifting skills and won the championship in 2008. In 2012, Saito joined the Formula Drift series in USA and in Asia, driving a Lexus SC430, powered by a twin- turbo engine from the Toyota Supra. In both series he won the title in 2012.

By many people he is today considered as the best drifter in the world...CLICK BELOW ON NEXT PAGE..READ ABOUT ALL THE GREATEST DRIFTING MASTERS IN THE WORLD..