Pickups were originally developed for the transportation of compact goods on mid-range distances -- they were utilitarian vehicles, but retained the comfort of cars. Pickup trucks received particular popularity in the United States, where they have gained farmers, small business owners, owners of large country estates and other practical people. Subsequently, however, they increasingly began to meet cars, used as quality and low-cost off-road vehicles-- the relative cheapness of pickups has caused them to spread throughout the world. So now these machines may well be equipped with very powerful engines and luxurious interior trim. The best pickup trucks can be determined in lots of various ways, and each model would have a certain quality and virtues. It is very difficult to point out which are the best pickup trucks ever produced in automotive history, but they are some models that really stand out among the rest. For today, we want to present to you a list of the twenty best pickup trucks that ever drove on the roads anywhere in this world. Which one of these gorgeous and reliable pickup trucks would suit you best? Check them out.

In the beginning of the 20-th century, only 35% of the American families still lived on farms, but the majority of businesses used one- or two-horse wagons as their means of transport. In 1925 the Ford Company built the first alternative to those wagons, and that was the pickup truck.

The Ford Model T Runabout with a pickup body was the first factory-built pickup truck of the company. It was released in April, 1925 priced at $281.

That same year, this truck set a new production record: more than 270,000 samples were produced. Ford also built its 12-millionth vehicle and opened the first factory in Mexico.

The new Ford Model T Runabout was actually a roadster type pickup made with a 56” long all steel bed that had 40 inches width, and 13 inches height. The truck had an adjustable tailgate while the sides of the bed came with pockets for stakes. Customers who wanted a longer and heavier duty pickup truck picked the Ford Model TT truck with an eight-foot long Express Body.

The Ford Model T pickup truck was powered by a small four cylinder engine rated at 20 hp, but it revolutionized the United States. This glorious era came to an end when the company decided to seize the production of the Model T in 1927. 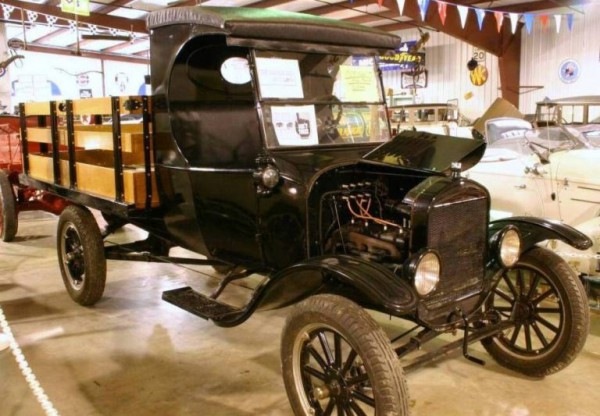 ..CLICK BELOW ON NEXT PAGE to CONTINUE and Read more about the next pickup truck on this list…