The 2003 Chevrolet SSR draws inspiration from the 1950 “Bull-Nose” Chevy pickups. However, Brian Stafford, Chevy SSR owner, has an idea of enlarging this design idea a bit further.  Thus, Brian turned the day of 50-year Chevy trucks existence into a creative one. He grafited the fenders, grill, and hood of a `53 Chevy 3000 into a 2003 Chevy SSR. The SSR offers great comfort better than any other 1950 truck.

The Classic lettering Chevrolet panel was taken from an original `53 tailgate. The fender was lowered for 4 inches. The wheel well was lengthened in order to adjust the SSR`s wheels and tires, whereas the profile front was lowered. An open 2003 hood was maintained in that state by a hood prop. 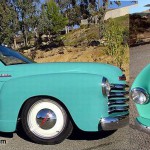 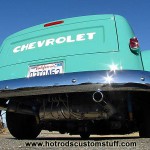 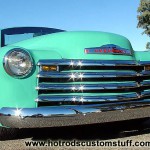 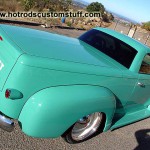 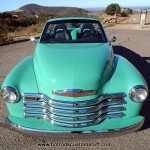 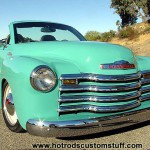 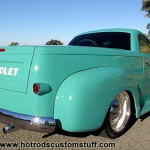 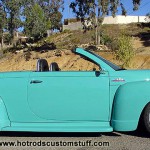 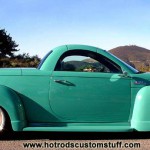 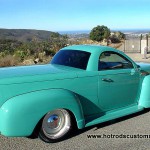 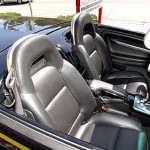 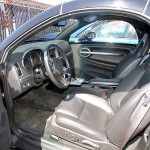 The SSR Is equipped with tailgate release and a tonneau which is remote operated.

Scott produced a brand new trucks design concept, where the tail lights of the SSR are placed at the back of the fenders, whereas the ones of the Chevy 3100 are adjusted right to the risers at the bed`s rear corners.

An authentic wood bed was added to the SSR to complete the conversion.

Though the car`s paint seems to vary from turquoise blue to green on the photos, there was no kind of painting in the restoration process. That`s due to the different lighting when photographing.