Ford Mustang Eleanor from the 1974 “Gone in 6o Seconds”

The original film “Gone in 60 Seconds” from 1974, was directed by Henry Blight “Toby” Halicki, who was also ​​a screenwriter, producer and leading actor in the film. The role of Eleanor in the film plays a 1971 Ford Mustang Mach 1, and in the film it is said that it is a model of 1973. “Eleanor” is the only car in history that has appeared in the credits of a movie. The original “Gone in 60 Seconds,” even begins with the phrase, “starring Eleanor” – the same Ford Mustang, to which is assigned the main role.

Halicki drove one Mustang during the whole movie, only slightly wielding a hammer between scenes, to peen the “stallion”. For comparison, in the remake were used 11 copies of “Eleanor”, which were absolutely identical in appearance, but with different technical characteristics and configuration. In the 2000 film, two Mustangs were absolutely ruined completely, though the spectacular jump on the bridge was half-built on computer. In the original film, all the jumps and crashes were real and what is most surprising, the Mustang of Halicki is alive and feels great in our time, which, unfortunately, cannot be said about “Toby”. He died on August 20, 1989 when was the filming of the second part of “Gone in 60 Seconds”. The 1971 Ford Mustang Mach 1 from the original movie “Gone in 60 Seconds” is still in working condition at the widow of the director. 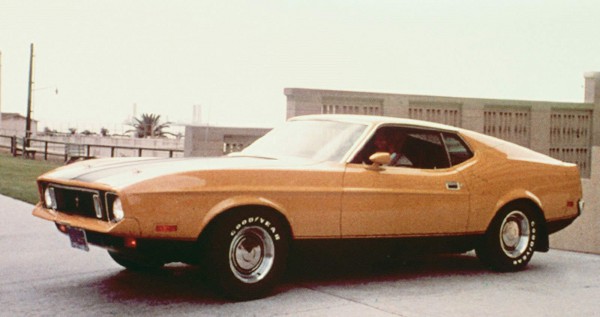 In the original Gone in 60 Seconds was removed the later model of the Mustang, rather than in the remake. As a star for his film Halicki chose one of the last classic “Ponies” from Ford. In the story it was the 1973 Mustang Mach 1, although in fact the car wasfrom 1971 and in the standard release, not a special Mach 1. Under the hood of “Eleanor” wasinstalled the modified 5.7-liter 351 Windsor engine. On the small block stands four chamber carburetor, and the power to the rear wheels, shod in Goodyear Rally GT tires, transmits the Cruisamatic transmission. On the machine is installed a safety cage as on NASCAR race cars of those years.

..CLICK BELOW ON NEXT PAGE to CONTINUE and Read more about this car…