It`s such a pity to see a perfect Mustang burning to ashes. Allegedly, this Shelby GT500 replica was set on fire after the gasoline had dropped on the carburetor. Fortunately, its driver, Mark Keller, a German television actor, exited the vehicle before the explosion. 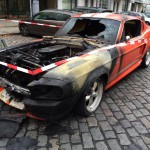 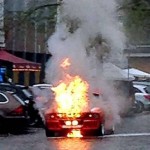 “We jumped out as the car caught fire already. The police came, the thought that shooting, asked for approval. Some passers-by thought we turn a new episode of ‘Alarm für Cobra 11,” he said.