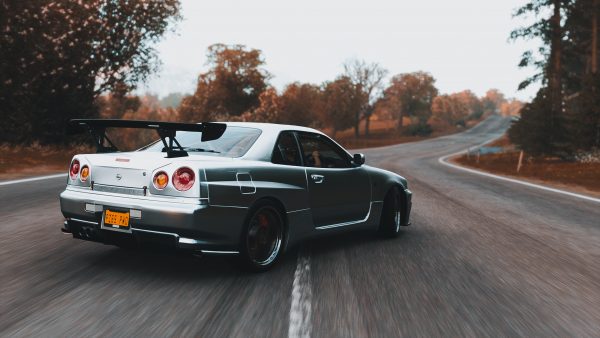 The Nissan Skyline is the stuff legends are made of as it’s one of the most celebrated Japanese performance cars of all time. It combines everyday practical elements with mythic elements in its history. It’s so iconic that on April 11, 2010, at a Guinness Book of Records event, 225 Skylines participated in a parade lap at the Silverstone, UK Circuit. The event earned the distinction for the most recorded Skylines at one meet at one time, and the most Skylines on the same track at the same time. Yet, it’s also enveloped in myths about why it’s supposedly illegal in the United States. Here’s what you need to know about this truly magnificent and iconic vehicle.

It’s in the Way it Turns

It was at the 1964 Suzuka Circuit where the legend of the Skyline began. The team barely made it to the race. To qualify, at least 100 units of the production version of the car had to be made first. Prince Motor Company, its manufacturer, has just made the minimum target, allowing the team to join the race. Back then, the Skyline GT was a modified sedan model, with a longer nose and a straight, six triple-carbureted engine, engineered by Shinichiro Sakurai.

Yoshikazu Sunako, one of its drivers, recalled that at first, he was doubtful about its chances in the race. The racer said that the body balance was “very bad and the tires were out,” which is why they could only drift when making a turn. But during a crucial hairpin turn in the race, the Skyline GT, driven by Sunako’s driver colleague, Tetsu Ikuzawa, overtook the leading Porsche precisely because of the way it turned. As the Skyline GT got ahead of the Porsche, onlookers went wild. In the end, the Porsche still won the race, but it was followed by Skylines from the 2nd to 6th place, inspiring motorsports enthusiasts all over the world.

Is it Really Illegal in the US?

Urban myths surround the Skyline being illegal in the United States. Some say it’s too powerful for US roads. Others opine that it’s being a right-hand-drive-only vehicle which makes it a problem. Meanwhile, some insist that due to their legendary motorsports performance, Nissan Skylines could easily outrun law enforcement if they’re driven by criminals.

However, the truth sounds less dramatic. First, it was deemed illegal, then, it was not-- depending on what Skyline generation is being talked about. In 1988, the Motor Vehicle Safety Compliance Act was passed to reduce grey market vehicles that did not meet US safety and emissions standards. With this legislation, grey market vehicles went from 70,000 in 1985 to only 300 in 1995. The story behind the Act is that it was heavily lobbied by US car manufacturers like Mercedes-Benz, which were losing sales to the grey market. However, 10 years later, in 1998, the National Highway and Traffic Administration (NHSA) granted immunity for import vehicles 25 years and older. So, a Nissan Skyline manufactured in or before 1995 can be imported into the United States, except in California.

Today, across 13 generations, the Nissan Skyline is particularly valued for its performance and tuning potential. Its Skyline GTRs, especially possess the handling adroitness and raw performance on the race track that makes it the best of the best. Meanwhile, the RB26DETTS’ tuning potential can be leveled up through modification. Some of the more basic iterations of the other models, like the turbocharged ones, can also be modified to produce superior performance, but many car enthusiasts looking for a base to build their dream performance car prefer the Nissan Skyline.

The Nissan Skyline has been prominently featured in video games like Gran Turismo, the Forza Motorsports, and the Need for Speed game series. The R34 GT-R was featured in the “Fast & Furious” film franchise, driven by Paul Walker. It inspired the frenzy for all things JDM, or Japanese vehicles for the Japanese Domestic Market that are never sold new outside of Japan. With its proven performance and its pop-culture fame, it’s also a much-sought-after classic car collectible among car enthusiasts. It was even reported that Skyline prices skyrocketed since the pandemic, further driving up its popularity and desirability, and attracting mainstream media attention.

The Nissan Skyline’s legendary status can be attributed to its being at the right place at the right time in its history, making what would otherwise be its weakness into a unique strength in motorsports. From then on, it attracted enthusiasts’ attention and made loyal fans out of them. It continued to meet and even surpass fandom expectations with its performance and tuning potential across 13 generations of different models. Its fame transcended motorsports and extended into pop culture and mainstream media, making it an iconic car among vehicle enthusiasts.