They definitely saved the best at the beginning. This is the cherry on the top. Or should I say the Nissan at its top speed. The first car running is Nissan GT-R R34 made by a RH9 tuning shop, all adorned in charming purple color. This eye-catching chameleon developed 1100 hp (844.3 KW) at all four wheels. It was almost ready to burst out and launch itself like a missile. 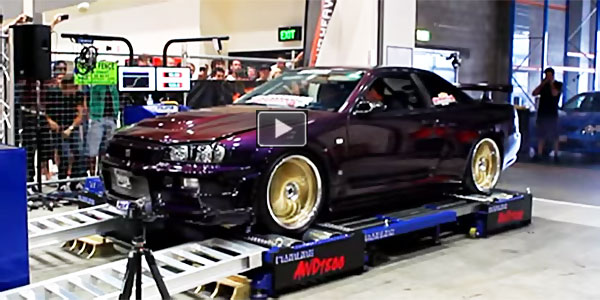 The second car reeling off on all four wheels was a “NITTO” R34 GTR. This yellow modification was able to develop 1000 hp (760 KW) at all four wheels, with Nitto RB26 2.7L stroker engine kit, GT4708R turbo, Nitto RB Oil Pump, Nitto gaskets and no nitrous oxide used… I really cannot think of any other engine type that could beat the sound of an angry RB…..Truly fantastic run!

The third car running on this video was a silver Toyota Supra being able to develop 1000 hp (776 KW) at the rear wheels. Though, it was not that much impressive as the R34.