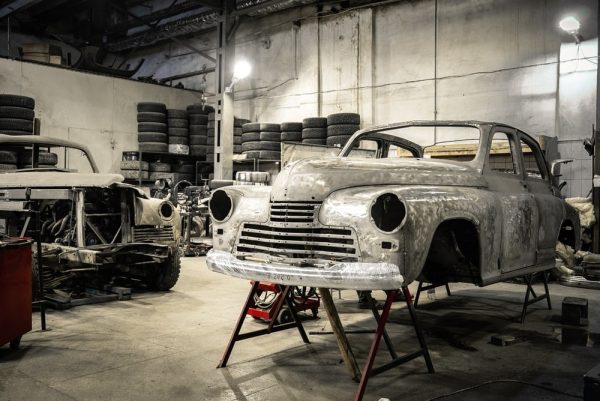 Unlike many forms of recycling, car recycling has been around for decades – basically since cars have been around. As junk cars started literally piling up, it became evident that something would have to be done about it. Enter the auto recycling industry, which has been going strong for 75 years now. It’s currently the 16th biggest US industry, and boasts an annual revenue of about $25 million from 7,000 or so auto recycling centers. Not every car gets recycled, but at least 80% of them do.

Keep in mind that there are different kinds of junk cars. The kind that gets recycled doesn’t have anything left to give except the scrap metal, and probably some usable parts. You could sell this kind of junk car to a scrapyard for a few hundred bucks. If your car isn’t ancient or completely wrecked, however, you might be able to get a better sales price from a company like CashforCars.io, which will take care of the title transfer and even tow away the vehicle for free. If you have a junk car to get rid of, just make sure you’re getting the best price for it before sending it off to the scrapyard.

The main payoff from recycling vehicles is the steel, which is used to produce new cars – about 13 million of them each year, in fact. Before they can get to all the steel, though, auto recyclers have to complete multiple steps to properly take apart and dispose of the various car parts. This applies to trucks, cars, SUVs, motorcycles, and pretty much anything else with an engine and at least two wheels.

There’s usually gasoline left in the tanks of most vehicles, as well as engine oil, brake fluid, and more. Car recyclers have to remove these fluids for several different reasons, and they’re all good ones. To start with, it’s required by law – these fluids shouldn’t make their way into the groundwater. The disposal methods are tightly regulated, and there are pretty serious penalties for improperly disposing of these fluids.

There are also more practical reasons, such as making it safer for customers to sort through the salvage for parts. It also reduces the risk of fires breaking out, since some of the fluids (like gasoline) are highly flammable.

Step 2: Take out the usable parts

Junkyards are treasure troves for anyone looking for used car parts, so auto recyclers sometimes send their vehicles there to be stripped of some of the extra parts. This includes not only engine parts, but also materials that they can’t possibly recycle, such as tires, rubber hoses, radios, and plastic reservoirs. This reduces the amount of work required for the auto recycler to access the steel inside the car, and it also benefits junkyards and their customers.

After the junkyard has taken what they want, the auto recycler will have to remove any other components that they can’t recycle.

As you might imagine, this step involves shredding the car frame into hand-sized pieces. Afterwards, a huge magnet separates the ferrous metals from the non-ferrous metals.

Since the vehicle wasn’t perfectly rid of non-metal parts before being shredded, there will be some material leftover. The technical name for this is auto-fluff, and it’s typically composed of wood, dirt, plastic, rubber, paper, glass, and even toxic metals like lead and cadmium. Unfortunately, this part of the vehicle (which makes up 15% or more of the average car) doesn’t get recycled; it’s just too mixed up and contaminated to be a candidate for the process. Instead, it’s shipped off to landfills. This certainly isn’t ideal, but technological innovations will hopefully give us a more thorough recycling process in the future.

Step 4: The metals are mixed

Auto makers use a ton of scrap metal from recycled vehicles, but they don’t use solely that metal for car frames; first it’s mixed with new metal for a stronger product. Each year, several million tons of steel are recycled from old vehicles. This is cost-effective for auto makers, and it also reduces emissions from steel mining.

The final product is finally transported to auto makers, to be used in new cars of all makes and models.

How much of the cars don’t get turned into scrap metal?

As it happens, quite a lot. Junkyards are experts at recycling car parts, from axles to reflectors. They sell these parts to individuals who drop by looking for something specific, and they also sell to mechanics who need a reliable supply of used car parts.

This particular part of the industry is currently thriving thanks to shortages in new and used cars, by the way. Since many people can’t find replacement vehicles when their old one breaks down, they choose to repair it using refurbished parts from junk cars.

Here’s a summarized list of the parts you can get from recycled junk cars:

This is just the start; if you want to see about getting a used car part, just ask a reliable mechanic what they think. You could get a deal, but you could also end up with somebody else’s problem. Take transmissions for instance – there are often no warning signs when they’re nearing the end of their lifespan. These parts are thoroughly tested (and retooled when necessary) before being sold, but there’s no guarantee that they’ll work for a particular length of time.

Even so, it isn’t as if used car parts are a huge gamble; you can mostly count on them to work. Plus, if you like being a part of “green” initiatives, you can be proud that you’ve joined hands with one of the biggest and oldest recycling industries in the US.