Seyth Miersma from Autoblog shares his impression of the 2014 Chevrolet Camaro, which he captured at the New York Auto Show for the first time. This car writer gives some details about this Camaro SS Convertible, some of them being its expensive price and manual transmission. 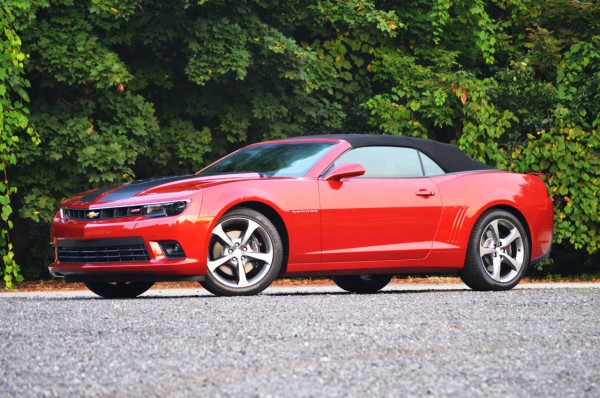 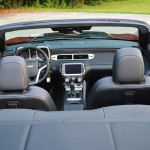 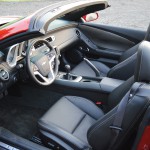 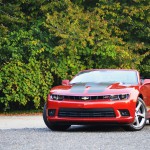 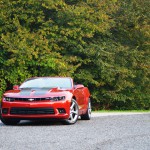 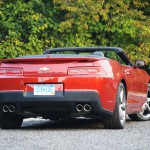 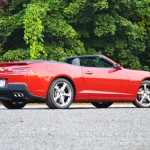 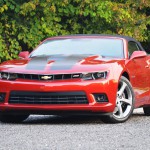 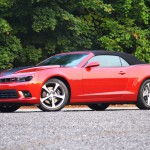 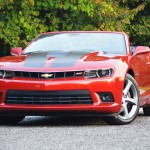 Here you have some renderings of his diving notes:

• It’s a piece of cake to pick out this 2014 Camaro Convertible SS (or the coupe, for that matter) from the outgoing model, with just a quick glance at the front of the thing. The air extractor dead-center at the top of the hood is a giveaway, only slightly less subtle than the lower, smaller grille with silver accents. In back, the two-per-side squared off taillight clusters have been replaced with single integrated units that I believe look a lot better. I’ll admit that I’m not crazy about the looks of the integrated lip spoiler on the Convertible SS, thoughChevy tells me that it does help with rear end lift at speed. I didn’t get the thing up to speeds high enough to notice the difference, apparently (commence with pillorying of my driving, in Comments).

• Inside the car you’ll find very little changed for the new model year, meaning the same love-it-or-hate-it, super-shiny plastic panels on the doors and framing the dash, along with big blocky gauges and (in our 2SS trim car) Chevy’s useful MyLink infotainment system.

• Though the 6.2-liter V8 engine is clearly the adrenaline-pumping heart of this modern muscle car, it’s the ability to drop the roof that makes the Camaro Convertible a more usable performance machine for me. I’ve always been impressed with the sports-car handling of the 5th generation Camaro, but the coupe’s turret-slit windows and thick pillars fore and aft have always made it difficult to place the car on the road with utter confidence. The increased visibility of the convertible transforms this car for me – in the interest of full disclosure, my above-average height certainly colors my strong feelings here.

• The engine’s 426 horsepower and 420 pound-feet of torque flow freely and joyfully to the Camaro’s rear wheels when you put your foot down, and they sound great doing so. Chevy rates the SS Convertible at about 5.4 seconds for the sprint from 0 to 60 miles per hour, which seems right on. The truth is that the big V8 convertible feels slightly more sluggish than the power numbers would indicate when moving away from a standstill, but faster ‘n hell when accelerating from speed up to much higher speeds. The engine needs to get spinning before the full force is unleashed.

• Fitted as my car was with the optional dual-mode exhaust system, I became quite enamored with passing lesser cars under highway overpasses, where the exhaust could trumpet against the cement and (probably) set off car alarms blocks away.

• The Camaro doesn’t exactly ‘dance’ along back roads – this is a car that clocks in at over two tons, don’t forget – but it offers enough raw grip to make it more than up to the challenge of anything I threw at it. It’s stunning to me just how rigid Chevy engineers have made this convertible, which doesn’t seem to give away one whit of flex to the coupe. The cowl shake that you remember from the fill-in-the-model-year-here F-Body convertible you rode in as a kid has been utterly banished.

• My Camaro SS Convertible tester stickered for over $46k, which is a lot more money than you might associate with a car that has historically been pegged as a performance bargain. Remember, especially when talking about high-powered convertibles, there’s just not a lot that goes head-to-head with Camaro other than Mustang. When it comes to sports convertibles with big V8-power and racy handling, plus two seats for the kids in back, you basically have your choice between Chevy,Ford, or spending a lot more money on something German.

• As you’d expect, Mustang is still pretty much in lock-step with Camaro in terms of pricing. These days, with the ‘Stang due to be replaced and the Camaro Convertible brand-new and looking as sexy as ever, I know where my money would go.