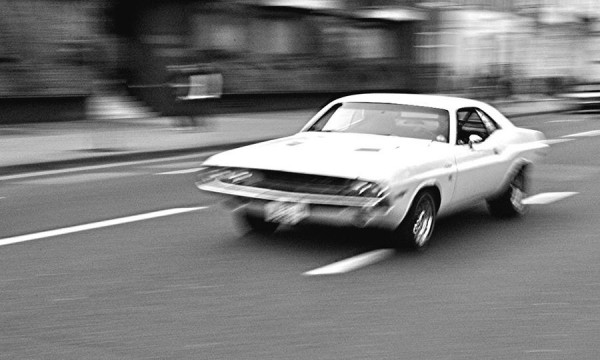 The Dodge Challenger is a real movie star. Its major role was in the epic 1971 “Vanishing Point”, made by the so called “auteurs” working for the Warner Brothers`s corporate overlords.

“Vanishing Point” dwells on issues encompassing society vs. man. It is pastiche of “Charlotte`s Web”, “1984”, and “Fahrenheit 451”. Barry Newman plays the promiscuous Kowalski, a dishonorably discharged former cop who was given a medal of honor in Vietnam. Now, Kowalski`s main occupation is driving. He has set on a mission of transporting a supercharged Dodge Challenger from Denver to San Francisco. Thus, Kowalski`s life centers on speed. “Everybody is after Kowalski; everybody wants a piece of his high.” Furthermore, Wal-Mart describes the action as “the ultimate chase movie”.

“Vanishing Point” would definitely not be that original without the Challenger, the naked girl on the Honda CL350 Scrambler, the basket of snakes and the Delaney, Bonnie & Friends mumbo-jumbo.
Let`s talk a little bit further about this Dodge. An ideal combination would be a Jamaica blue metallic running on a 440 Six-Pak engine. Its lidded headlights, short deck, long hood gives a special allure to the Challenger.