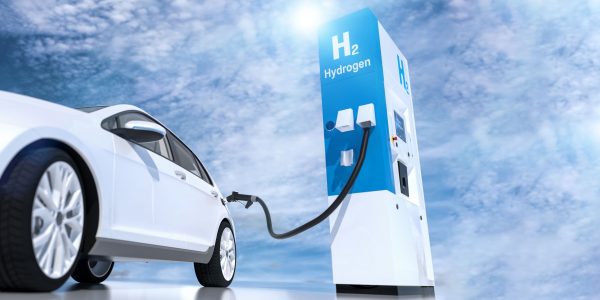 When you think of refuelling your car, you probably think of filling the tank with petrol or diesel, or in the case of an electric car, plugging it in to charge. But a new type of fuel is on the rise: hydrogen.

The first car to run on hydrogen, the Toyota Mirai, was introduced in 2014 and is one of two hydrogen-powered cars currently on the market – the other being the Hyundai Nexo.

How Does it Work?

Inside the vehicle, the chemical reaction that occurs when hydrogen meets oxygen produces electricity, which can be stored inside a battery. As the by-products of this reaction are heat and water, water is all that is emitted from the tailpipe.

Similar to a petrol car, these cars are refuelled via a pump – though there are currently a limited number of fuelling stations equipped for hydrogen. Still, this may change in the near future; in 2017, the government announced £23 million in funding for the development of hydrogen power in the UK. They are also quick to refuel, as the tank can be filled up in just five minutes.

Cars fuelled by hydrogen are undoubtedly expensive. The Toyota Mirai, for example, will set you back a minimum of £49,995. They can also be expensive to run, with hydrogen priced at around £10 per kilogram. So a 6kg tank would cost roughly £60 to fill. With that said, petrol is currently around £1.68 per litre, so filling a petrol car with a tank size of 40 litres will cost £67.20.

The Hyundai Nexo uses 0.95kg of hydrogen per 100km, which works out at about £10. An electric car of similar size can cover the same distance for approximately £3, and a petrol car could do it for just under £16.

If this is a bit out of your budget, don’t panic. Enter car competitions such as Dream Car Giveaways to be in with a chance of winning a brand-new car at a fraction of the price.

It is worth noting that if you’re driving a hydrogen car, you’re exempt from vehicle excise duty. This is because they do not emit CO2. However, as all currently available hydrogen cars cost over £40,000, you’ll still have to pay a supplement of £310 for 5 years.

What About the Environment?

As previously mentioned, hydrogen-fuelled cars emit only water, making them more environmentally friendly than cars that run on petrol or diesel. It is also possible to generate hydrogen using renewable electricity.

As hydrogen is flammable, there are some concerns regarding the safety of this type of fuel. Hydrogen flames are almost invisible, which could make them harder to locate and extinguish. However, petrol is also flammable, and it is regularly used in cars.

Is Hydrogen for Me?

To decide whether a hydrogen car is right for you, you might find it helpful to weigh up the pros and cons. They are expensive to purchase, but they are certainly better for the environment than petrol or diesel. Plus, with the government aiming to ban the sale of new petrol and diesel cars by 2030, it’s possible that new models of hydrogen cars will be produced, potentially including some cheaper options.  Still, if you’re concerned about the environment but on a budget, it might be worth looking into electric cars, which appear to have better fuel economy.